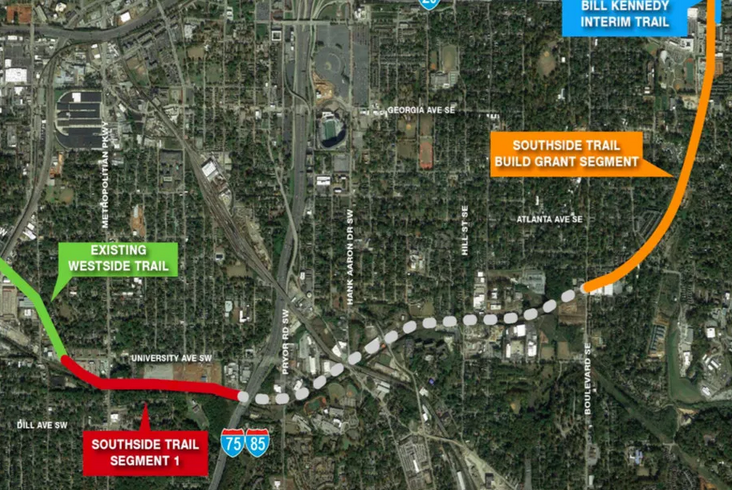 The U.S. Department of Transportation has announced that 55 infrastructure projects across the country have been awarded grants from the federal Better Utilizing Investments to Leverage Development (BUILD) program.

The Atlanta Beltline, unfortunately, is not one of them.

Beltline officials had hoped the $16 million BUILD grant they applied for earlier this year would help fund construction of the Southside Trail—through Grant, Ormewood, and Chosewood parks, among other neighborhoods—but now they’re searching for new financial channels to help carry out the project.

“While we were disappointed not to receive the BUILD grant to fund a portion of Southside Trail construction, we continue to aggressively pursue the public and private funding sources needed to complete full build-out of the trail component,” reads a Beltline statement provided to Curbed Atlanta.

Beltline officials have not yet responded to Curbed’s inquiries pertaining to what the news could mean for the trail project’s timeline.

This isn’t the first time the Beltline has been turned down for BUILD grant monies.

City leaders tried, to no avail, to secure money from the program last year, too, according to the Atlanta Business Chronicle.

The first part of the Southside Trail, slated to begin construction in coming months, is anticipated to cost some $16 million—the same amount the BUILD grant would have been worth. That work will bring the trail out of Adair Park and around to a point near the Interstate 75/85 Connector.

The whole Southside Trail corridor, expected to link University Avenue to Glenwood Avenue in Ormewood Park by way of a 4.5-mile paved path, is ultimately estimated to cost $70 million.

Beltline officials have previously said the latest BUILD grant, combined with local cash, would have helped build the easternmost 1.5 miles of the Southside Trail, stretching from the north side of Interstate 20, over Bill Kennedy Way, down to Boulevard.